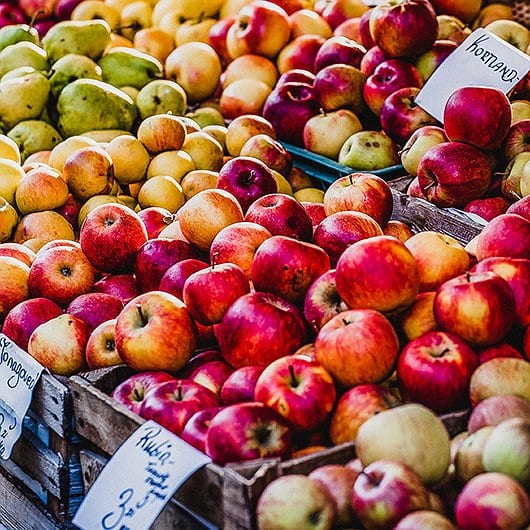 Sit down at just about any trendy restaurant these days and chances are the menu makes some mention of “locally sourced” or “sustainable” ingredients, often wrapped up together under the umbrella term of “farm-to-table.” No doubt the thought of all-American, honest farmers, personally bringing their crisp, fresh produce and meat from humanely cared for and killed livestock directly to the restaurant itself is appealing, but how did it become a ubiquitous part the foodie lexicon?
Farm-to-Table 1.0

As industrial America began asserting itself in the early 1900s over its hitherto rural lifestyle, which required most work, including food production, to be done by hand, large numbers of farmers and agricultural workers abandoned their farms for jobs on the assembly lines in major cities. To support the cultural shift, which included quick meals on the go instead of sit-downs at the family table, an equal amount of mechanization in food production and distribution was also required. Improvements in technology also allowed food to be cooked, preserved, and transported with greater efficiency and in greater numbers. The culture of convenience that arose following World War II firmly established a new culinary order that openly disdained the rural mentality as hopelessly old-fashioned inhibitors of “progress.” Indeed, utopian futures as depicted in shows like The Jetsons replaced eating virtually altogether with bite-size food pills.

The Times They Are a-Changin’

After the prosperity and abundance of post-war America, the late 1960s saw a counter-cultural revolution spread to many parts of the country. Advocating a simpler, more natural life, many of the self proclaimed hippies returned to the land. But this was more often a statement of opting out of a corporate system rather than health concerns about the food chain. Much like vegetarianism, the movement remained relatively small and fringe for several decades until the mid-’90s, when a greater interest in health and cooking began to prevail. By the late 2000s, a national shift was underway helped by prominent activist voices like author Michael Pollan, chefs, and the rise of foodie culture. The government has even weighed in on the trend, in 2008 the Food, Conservation, and Energy Act, stipulated that a “local” product must be produced and transported within 400 miles of its origin.

Many attribute the first farm-to-table restaurant to chef Alice Waters, who established Chez Panisse in Berkeley, California in 1971. Believing that cooking should be based on the finest and freshest seasonal ingredients Waters looked to source foods that were produced sustainably and locally; she and the restaurant gradually rose to fame, eventually earning the designation by Gourmet magazine in 2001 as the Best Restaurant in America. In the 1990s, the movement was joined by restauranteurs like Jerry Traunfeld, who opened Herbfarm restaurant in Woodinville, Washington in 1990, and Sacramento chef/owner Rick Mahan, who opened Waterboy in 1996. Watching the growth of the new industry, cities themselves saw opportunity to repurpose and zone blighted or abandoned areas for community gardens, with Cleveland leading the way in 2007. Demand from the growing number of farm-to-table restaurants has also brought young people back to farming. According to a census by the Department of Agriculture, the number of Americans younger than 35 who are running farms increased by 10 percent between 2007 and 2012.

Farm-to-table has also influenced the way people cook at home. Home chefs often visit their neighborhood farmer’s market to get their produce from local farmers. The increase demand for accessible local produce has resulted in a 370% increase in the number of farmer’s markets across the US – not to mention the prevalence natural and organic markets like Whole Foods.
The next time you sit down to a nice dinner at your favorite farm-to-table restaurant or find yourself picking up some fresh lettuce at the local farmer’s market, remember how far we’ve come.